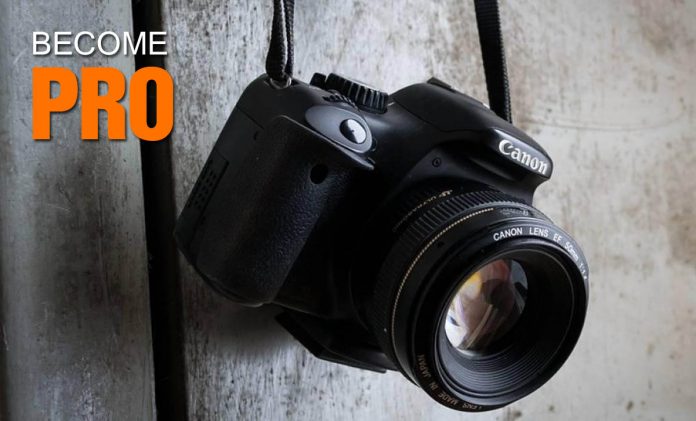 As any photographer will tell you, DSLR cameras are all about controlling the ability of the camera to click photographs. Since photography is essentially a way of capturing the light entering the lens. Such control effectively boils down to controlling the amount of light reaching the sensor. And how the sensor deciphers it. While this may seem simple in theory. The range of buttons and dials on the device can make anyone wonder whether learning; how to use a DSLR camera is worth the trouble. To persuade you that it is indeed worth it, we’ll cover the basics of DSLR operation below.

Low apertures, on the other hand, keep the subject in the foreground in focus but blur out the background. Aperture priority lets you decide which scenario you want. Then chooses your shutter speed based on the aperture you’ve chosen.

When learning how to use a DSLR camera, you would probably want to leave the rendition of colors to the camera itself. At a more advanced stage though, you would want to decide how the greys and blacks in your image; (and by corollary all the other colors) are rendered. In other words, you want to decide the way the camera interprets the exposure of the sensor to light. The way the camera achieves such a choice of colors is called “metering”. There are 3 types of metering:

ISO refers to the sensitivity of the camera sensor to the light coming in. Think of ISO as placing a pair of sunglasses over the lens; then adjusting the darkness of the shades to achieve the correct sensitivity. Hence, on a sunny day, you can keep the sensitivity to a minimum ie ISO 100 or 200 and get great pictures. In dark conditions, however, you have to increase the ISO to levels as high as 1600 to achieve decent images. However, because of this increased sensitivity, the clarity of the image suffers and “noise” ie graininess of the image grows.

While metering allows you to decide which part of the image to use to decide the overall appearance of the image, exposure compensation lets you change the camera’s “mind-set” to make it apply metering that is more or less than 18% grey. You can achieve it by using a tiny button with +/- on it. Pressing + makes the exposure above 18% grey and – pulls it below that median. This translates to lighter/darker images compared to what the camera would normally have clicked.

Last but perhaps most importantly, the object has to be “in focus” for it to be shot. In other words, the camera’s lens must be “looking at” the object just as we would. Focus is of three types viz –

Unlike a majority of guides that explain how to use a DSLR camera; we decided to stay away from a “do this first, then do this” approach since we know that any of the above metrics can be modified at any time and in no particular order. Indeed, you may well need to modify multiple settings multiple times before you can achieve that perfect image. In the beginning, however, it is advisable to keep experimentation within the bounds of one or two metrics. As you gain experience and confidence, you can modify multiple metrics simultaneously and in doing so, bring out the uniqueness of your creativity to the maximum extent allowed by your DSLR camera.

Outdoor Party Lights. Tips to Find The Best Ones

ABOUT US
"The Online Buyer Review aim is to show you everything about every product before you buy it"
Contact us: onlinebuyerreview@gmail.com
FOLLOW US
© Newspaper WordPress Theme by TagDiv
MORE STORIES